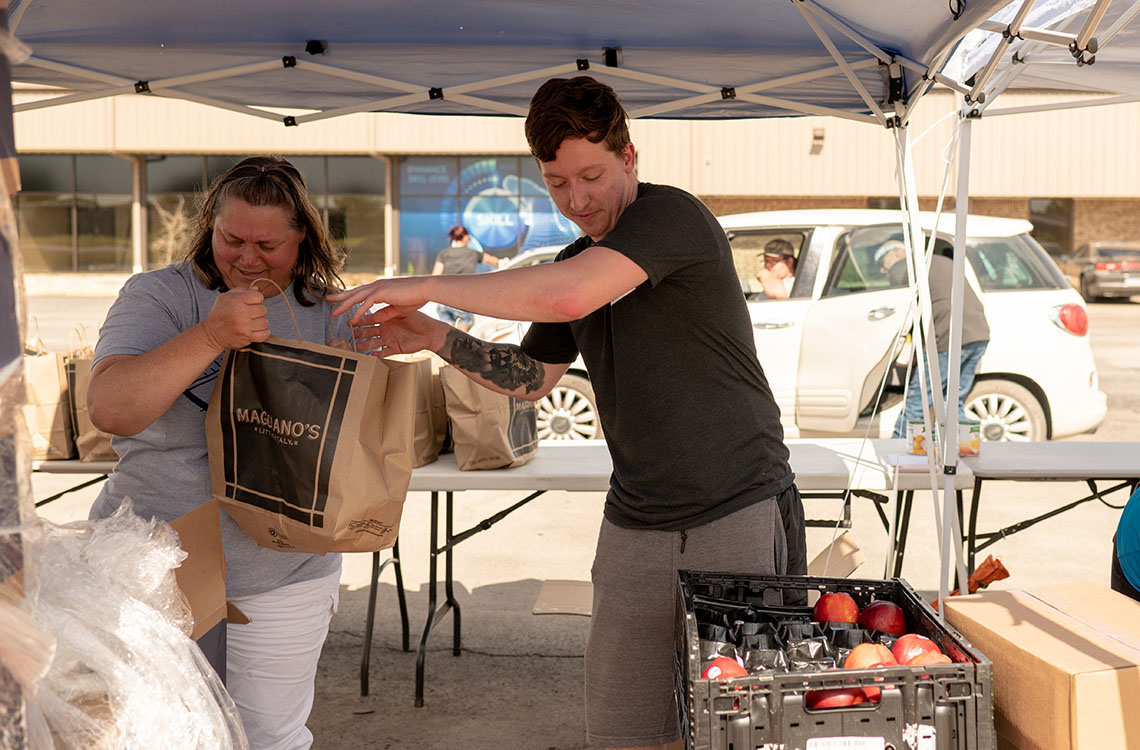 August 3, 2022 (Pryor, Okla.) — The RAE Family Foundation (RFF) hosted the first ever mobile food pantry for the Mid-America Industrial Park community last week and it was an amazing success. At the end of a very hot day, the organization had helped 192 families. That is 677 people, including 258 children.

The RFF is the corporate nonprofit created of RAE Corporation, a locally-owned and privately-held company that has operated in the industrial park for over 50 years. They partnered with Catholic Charites, the Food Bank and Cherokee Nation to make this food pantry happen. One of the core values at RAE Corporation is to “Help Others” and this effort was just one of the ways they put that core value into action.

“This was actually the second biggest distribution in terms of number of total people served that we have done since we started the mobile pantries last fall,” said Phillip Griffith, who coordinates all the mobile food pantries in eastern Oklahoma. Griffith also said it was probably the hottest mobile food pantry yet. With temperatures reaching 105 degrees, the volunteers from the RFF faced heat exhaustion but kept going.

There was talk about postponing this event because of the heat, but the organizers wanted to target the end of the month. Many families may get other food assistance but with food costs rising weekly, they often run out by the end of the month. When the RFF began planning this event, they had no idea how many people to expect or if they would be able to reach the people that needed the food the most.

“We did not have to turn anyone away but we did run out of some food items earlier than we wanted,” said Lisa Carpenter, Director of Culture & Engagement at RAE Corporation. “Many of the people we served sat in hot cars for over an hour to get the bags of food. We had planned to start handing out food a 4pm and cars were lined up starting at 2:45.”

Much of the 7,400 pounds of food was given out was provided by the Food Bank of Eastern Oklahoma and other Catholic Charities partners. The RAE Family Foundation invested $5,000 to purchase some food to supplement what was provided.

“In recent years, we have wanted to help more people through our RAE Family Foundation but it has been hard to decide the best way to do that. We want to see people in our community get more out of life, get better in life. People need to fulfill their basic needs like food and shelter in order to do that, so we decided to focus on that,” said Eric Swank, President & CEO of RAE Corporation. “Our vision is to ‘Make Great Happen’ and the mobile food pantry was a great start to doing that in our community.”

The team learned a lot during this first mobile pantry and are already planning the next one for August 23 from 4-6pm at the Cherokee Nation Career Services located at 6789 US-69. The Catholic Charities can deliver food to this location once per month if there are volunteers and donors in place. If you would like to be a part of an upcoming mobile food pantry, email lisac@rae-corp.com.